I have the bad habit of scrolling through Instagram.  I literally waste so much of my free time scrolling through other people’s lives that it’s ridiculous.  I could get so much more done and probably could have finished another book or two, with the amount of time I spend online scrolling.  I have decided that I’m going to lessen the amount of time I spend online drastically even if I have to uninstall social media apps from my phone.

When did you know you had the gift to write? At what age? Did you write any books as a child/teenager?

I don’t think I realized that I could write until I finished writing Where Secrets Lie.  The response from readers was very positive, enthusiastic and they wanted more.  I wrote the book just because at that time in my life I felt like it was something I needed to get off my chest.  As a child I was always the little girl with the diary, the one who wrote her thoughts down, so writing was just an extension of my thoughts.  As a teenager I didn’t write any books but I certainly had fun writing raps with my best friend.  Thinking back to our raps I have to laugh…

After discovering, What stories did you want to Tell? Who was or is your inspiration?

My stories are all relationship based for the most part.  I love group dynamics, examining people and how they relate to one another.  I am a naturally observant person, so I people watch, I’m a listener so I’m able to extrapolate the feelings people describe and build on them.  I’m here to tell the stories of those in relationships, but I know there are a million books like that.  I like to go a little deeper though and examine the things that make people do the things they do, and what the consequences are of those actions.   I like my characters to be realistic and flawed just like we are.  My inspiration comes from everything and everyone I come into contact with.  I see a story in the most mundane situations, because I like to ask questions.  So when something comes up, I’m always the person to ask “so why do you think that happened?”  It really forces the person telling the story to think more, and it helps me with creativity and the expansion of knowledge.

Where do your Passion comes from in your writing? HOW do you create characters? HOW do you know what book to make a series out of?

My passion.  I’m a reader first and foremost, I love to read books.  All kinds of books. Books similar to the ones I write, books on African-American history, books on spirituality.  My passion comes from being able to tell a story that I know others can relate to, and stories that others can fantasize about.  We all deserve that escape right?  I create characters in various ways.  Some are based loosely off of people I know, or people my friends know.  Most characters reside strictly in my imagination, their lives are a vision of my creativity.

Creating a series of books is something I never thought about until I published and began to hear back from readers.   Now that I’ve been writing for some time, I begin with the end in mind.  I try to create either a group or a standout character that I think readers will want to know more about.  That has been really successful because hearing readers mention my characters by name with statements like “We need more of Summer!”   That lets me know that I need to give them what they want and give them some closure on a character.

A quick read from her latest novel…. 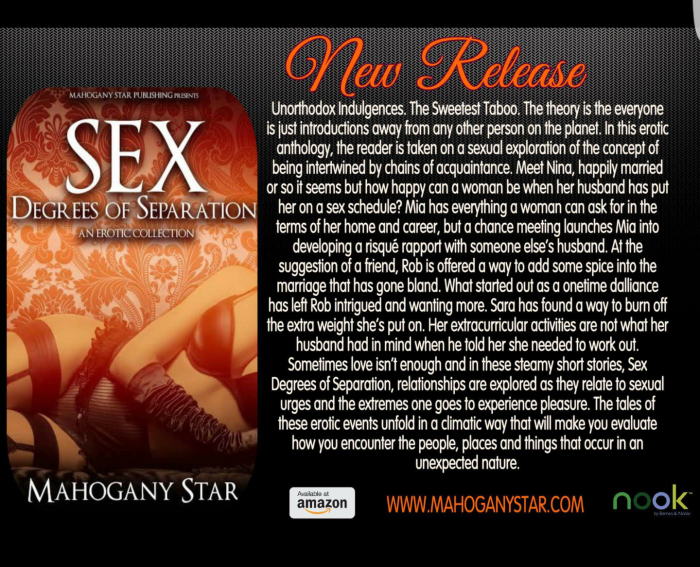 A  Novel featuring you as the main character……

My Novel would be called “Love Hangover”.

Star looked over the balcony of the winding staircase that led down to the entryway of her home.  She shook her head in disgust, again.  There she stood in her cream-colored all lace La Perla babydoll, waiting for her husband of five years to get in.  Lately, Ian had been coming home later and later covered in the scent of alcohol and cheap perfume.  Ian stopped at the bottom of the winding staircase, gripping the wooden rail steadying himself. He half smiled, seemingly not impressed with the expensive lingerie that Star stood in.  “Oh you waited up..again.”  Ian slurred.

Star’s eyes began to water, the expensive MAC mascara promised it was waterproof.  “Yeah I’m up again.  I was waiting for you.”  Star did a slow twirl hoping Ian could see that her whole ass was exposed except for the thin line that separated her ass cheeks.  Ian walked past Star seemingly uninterested and made his way to the bedroom they shared.  Ian began peeling his clothes and tossing them across the room before plopping down backwards on the bed.  Star thought it was now or never, it had been weeks since they last made love,  if she was going to get her groove on she would have to take the initiative.  She climbed on the king sized bed and began placing kisses on Ian’s chocolate neck.  His beard smelled of a mixture of cognac and cigars but Star pressed on.  When she reached for the slit in Ian’s shorts he wildly flailed his arms, causing Star to lose her balance, sending her off the bed, landing on her bare ass on the floor.  Ian never looked up to see if she was ok.  He dropped his flailing arms across his chest and began to snore simultaneously.

Star, humiliated, made her way to the master bathroom and sat at her vanity.  She looked at herself in the mirror realizing the mascara had failed her.  Two eyes that resembled that of a raccoon stared back at her.  Her bright red lipstick was smeared across her pretty brown face.  Her hands shook as she got up to wash her face.  She realized her marriage was over, but she knew that a year ago when Ian began spending more time with his secretary than he did her.  Star took off the neglige’ and packed herself a small bag.  With the way Ian had been acting lately, she didn’t think her absence would bother him much.  After throwing on her favorite Golden Goose velour sweat suit, she put on the Gucci sneakers Ian had bought for her on her last birthday.  Star started to walk out of the bedroom, but then she sat back down and began writing her goodbye letter to Ian.

What would you tell a young child who wants to become writer?

I would tell them to take chances, and to write as much as they can, whenever they can. I would also tell them to read as much as possible.  Other points of view, learning about history and other cultures all help writers it doesn’t matter what genre you’re writing in.

What’s  next for  You? How would you extend your Brand?

I’m currently writing my follow-up to Summer’s Heat called Four Seasons of Ecstasy. This story follows Summer and introduces her to three women who are strong, smart and sexy.  I’m also working with Danard Wilson Author of Lost & Found, and with the creative writing team from the popular web series based on the book, “The Other Side of Brooklyn”.  I plan on extending my brand through working with other Authors and writing stories that are different from anything I’ve done thus far.  It’s really exciting.

Have you ever thought about  starting a writer’s  boot camp?

I actually haven’t ever thought about that, but that certainly sounds like something I’d love to work with other Author’s in doing in the future.

Author, Boutique Owner, Featured Stylist, Event Host, Mother and Much More! I love everything about Fashion. I help women declutter their closets and add Timeless Unique Pieces to their Wardrobe. View all posts by secrettreas

2 thoughts on “Who Is Mahogany Star?”

This site uses Akismet to reduce spam. Learn how your comment data is processed.

Get Out and Network